Just six short weeks after beginning my PhD program, I hopped into a Toyota Hilux in Ushuaia, Tierra del Fuego with two complete strangers. I would spend the next 8 days and 1600 kilometers with them, hiking 75 kilometers up and down largely pathless mountain faces near the Argentinian Patagonian cities of Ushuaia, El Calafate, and El Chalten. We would conduct intensive field research for upwards of fourteen hours a day, come rain, sun, punishing wind, and snow. We would be sunburnt, windburnt, and frost-nipped, even though it was the dead of summer. We would laugh together, even as we struggled together.

This trip was the first of four intensive field campaigns I will make in 2019 to study the local adaptation of lenga across Argentinian Patagonia. In each of 20 sites, I lead a rotating crew of volunteers and paid field hands out into the woods, where we randomly choose 25 individual trees to sample. We spend 10-20 minutes getting to know each one intimately, including drilling holes in them to obtain tree cores, cutting off bits of its branches to gather DNA samples, measuring morphological characteristics, and marking it. 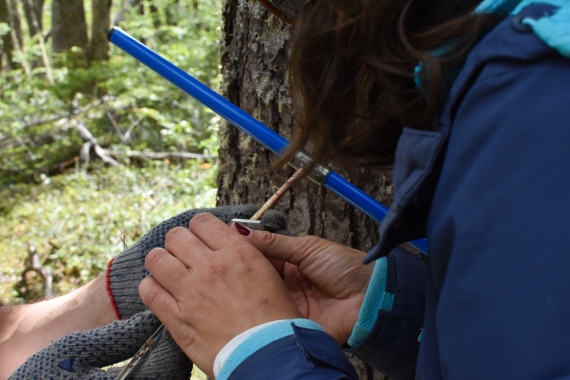 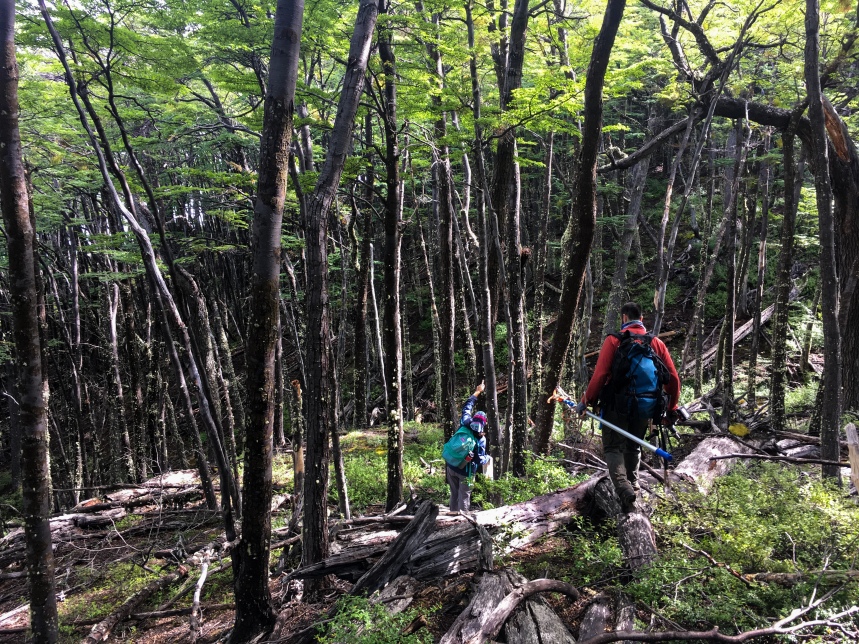 But back to the beginning. After spending just ten days in Bariloche getting to know the INTA team and the research protocol, I hopped on a plane with Carolina, a Argentinian researcher from INTA. We were headed for Ushuaia, the southernmost city of the world, to take advantage of their staggeringly short window of summer. We had hired a crew of local field hands in Ushuaia, and we spent the first few days camped out near Cerro Guanaco in Tierra del Fuego National Park, forming a working bond with our nascent team and navigating around a strong language barrier that often left me in the pitch dark. It was early in the field season, so our bodies and minds were still well-rested and soft – at least, for the time being. 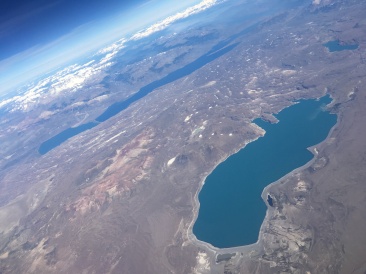 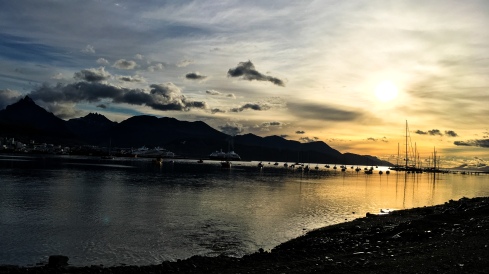 Ushuaia sits near the southernmost limit of the N.pumilio range, and our two sites here were our lowest in terms of elevation: the low site was directly adjacent to a glacier-fed lake (which drains into the famous Beagle Channel) just 20 or so meters above sea level, and the higher population was around 300 meters above sea level. By comparison, our two sites in Bariloche (near 41°S) were at 1100 m and 1300 m a.s.l., respectively.

Once our two Ushuaian sites were complete, we said Chau to two of our field hands and headed north with the third, an Argentine named Cristian. Naturally, of the three field hands he had the least English, but with various hand signals and the indispensable translational help of Caro, we managed.

Field work always comes with a unique set of challenges, but no amount of old wives’ remedies could have fixed the neverending hiccups we had on this trip. During the drive north from Ushuaia, the wind grew so ferocious that the car ferries crossing from Isla Grande to the mainland stopped running, leaving us stranded in the Chilean part of Tierra del Fuego for six long hours. Once the sun set and the winds finally calmed, we spent the night in nearby Rio Gallegos on the Atlantic coast, and finally rolled into the lakeside town of El Calafate around 11 a.m. the next day.

El Calafate, it should be noted, is named after a plant. It’s a beautiful native evergreen shrub that grows delicious blueberry-like fruits. It’s also a beautiful native evergreen shrub that’s covered in inch-long spines that will destroy everything you love, and it’s also usually swarming in venomous camouflaged caterpillars that, when touched, leave you with a burning and nauseating pain followed by strange polka-dot bruises. I tell you about this wonderful native plant because the route to our first field site was absolutely carpeted in caterpillar-infested calafate. 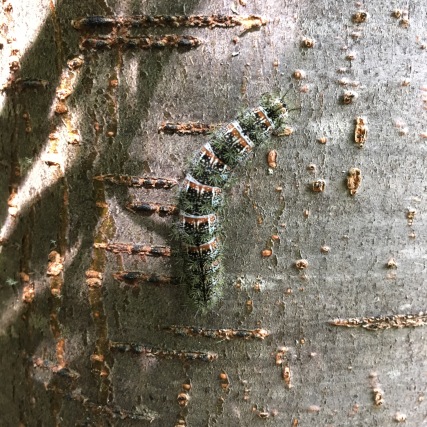 Happily, though, our sampling site in El Calafate happened to be right next to the Perito Moreno glacier, one of the largest in the world. Moving from tree to tree, we would catch glimpses of turquoise water and the mind-boggling river of blinding white ice snaking off into the Andes. There were distant thunder-like cracks and booms of the glacier shifting in the distance, more a corporeal sensation than a sound, like I could feel the glacier breaking the Earth. The silence of the wilderness was periodically punctured by the shrill chatter of cachaña, brilliant green endemic parakeets, as they flew overhead. Spanglish jokes were traded fast and furious to take our minds off the mounting mental and physical fatigue.

It was only the third day, but we had settled into an easy routine: Cristian drilling cores and marking trees, Caro handling cores and DNA, and me inscribing data and taking morphological measurements. We descended upon each tree like three hungry locusts, mechanically performing our assigned jobs to steal the trees’ information. We made the cardinal error of believing the second day in El Calafate would be easier than the first. An elevation miscalculation on the first day meant we had to make a grueling two-kilometer hike pretty much straight uphill from the lake, in search of a more “stressed” population of trees. And boy did we find it – on a hilltop crawling with lycopodium, tiny pockets of subalpine wetland, and yes, more calafate – we found a stunted population overlooking the lake. We sampled about half the required number of trees in the chilly sunshine, before deciding to leave at a decent hour so we could run some essential errands in town.

The next day we had to skedaddle to El Chalten, a village in which hikers outnumbered cars on the roads by at least 10:1. We paired with another vagabond Argentine field assistant named Alejandro and enjoyed a long sunny drive up a valley to our sampling site near a tiny glacier, where it promptly began pouring rain and didn’t stop for the entire day. We chose to sample the higher site first, hiking up to the tiny teal lagoon at the base of the glacier, where the lenga were waist-high at best, and then descending just far enough to find trees mature enough to sample. Everything quickly became waterlogged – my data sheet turned to pulp, despite my high-tech Ziploc-bag rain cover (NASA-approved!). Caro opted to take off her sodden rain jacket and poke neck- and arm-holes into a huge black garbage bag instead, wearing it as a poncho. Such is the nature of us field-hardened scientists, though, that we found a way to joke about absolutely everything. Caro’s trash bag outfit we lovingly referred to as the “endangered forest whale” costume.  Every time Cristian pulled a good tree core specimen out of the trunk, he would exclaim “It’s a boy! or “It’s a girl!” (although it’s still unclear how exactly one determines the gender of a tree core). 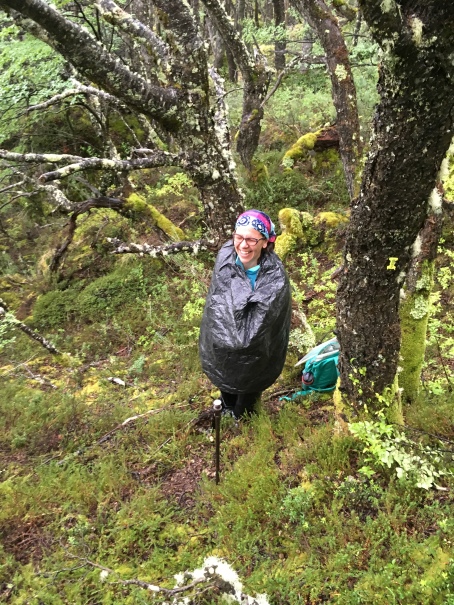 By the time we high-tailed it out of the socked-in valley, the road Cristian was navigating was more river than gravel. Mercifully we made it back to El Chalten in one piece, and we flung our sodden field equipment and clothing all over the hotel room in a desperate bid to dry out overnight. Against all odds we awoke to a bluebird sky, and we were optimistic about the coming field day as we headed back up the same road. But, of course – OF COURSE – it had rained so much overnight that the water had washed out a bridge on the route to our field site.

We climbed out of the car, our breath turning to mist in the cold morning air. We looked at the ruined bridge and then at each other, shrugged, and started walking down the road via a nearby pedestrian-only bridge. As the crow flew, we were only 8 kilometers from our intended site, but the road followed the river and was thus anything but straight. We hiked two hours down the road to get as close to our intended sampling site as possible (still about 3 km away!) and completed our four hours of sampling along the valley floor. The trees were much straighter and taller than those we’d found near the glacier, although the terrain was still challenging and rocky. Saddled with our newly collected data and samples, we turned around and hiked two hours back out again, eyeing Fitz Roy in the distance. 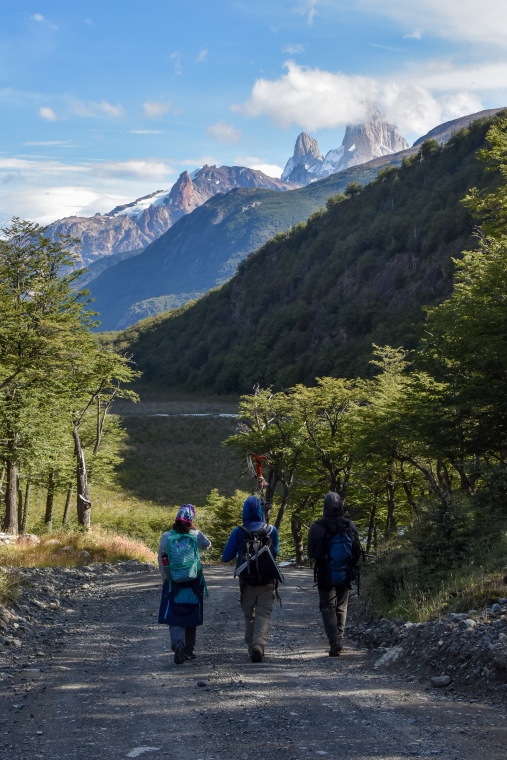 As if all of this wasn’t enough, the ferry delay in Chile meant that we had to tack on an additional field day beyond what we’d originally planned. The final day, we drove back to El Calafate (sans Ale) to finish the last 15 trees from the higher site. Rain doggedly followed us all the way from El Chalten, dampening our exhausted spirits, but the science had to be scienced and we didn’t have any choice but to dive back into the rain. We did our best to joke our way up the mountain, even as the rain transformed before our shocked eyes into fat snowflakes that flew sideways in the driving wind. To the everlasting credit of our small but dediated team, we finished the site, did an embarrassing dance in the privacy of the forest to celebrate our accomplishment, and barreled back down the trail to the truck.

We piled into the Hilux and blasted the heater, then unanimously decided to sit in the truck just long enough to wolf down some sandwiches and warm our toes before subjecting ourselves to even more of each other’s company and the summertime winter. In truth it was the only option available to us; we couldn’t come all this way and not explore the glacier we’d been eyeing for three days from afar. We navigated the endless staircases and raised metal platforms, worming our way ever closer to the incomprehensible mass of ice. The scale was both more and less impressive up close, where we could see the 70-meter-tall wall, largely blinding white but streaked with the purest Caribbean aquamarine deep within. Five kilometers wide and over 14 long, it’s the third-largest reserve of (ice-locked) fresh water on Earth. I couldn’t feel anything but insignificance and wonder, standing next to it.

Eight days of sleep deprevation, screaming muscles, and mental fatigue crashed together and made our last few days a loopy mess. But despite the nonstop challenges, I like to think we had fun. There was always something about the work and the cameraderie that kept our spirits high. There were views through the lenga branches of turquoise lakes and ocean channels far below. There were the Spanglish jokes, which got worse as time wore on, our high humor exacerbated by sheer exhaustion and emotions that were always just a little bit too close to the surface.

Friendship on the road is propelled by a different blend of fuel, borne of sheer necessity and proximity. It doesn’t matter whether you would be friends with your field companions in “real life.” It doesn’t matter if you have nothing in common, if you are on complete opposite ends of the human spectrum, or if you can’t really communicate thanks to a language barrier a mile high. You must find common ground. It’s sink or swim, and if you sink, you’ll surely drown (or more likely end up dead on the side of the highway).

So, after eight days of intense emotional contact and utter dearth of personal space, after going deep and finding an unlikely camaraderie with a bunch of strangers, it all ended. I’m left only with the photos, the lenga samples, and the memories of a long week spent rambling the forests of southern Patagonia with two no-longer strangers.